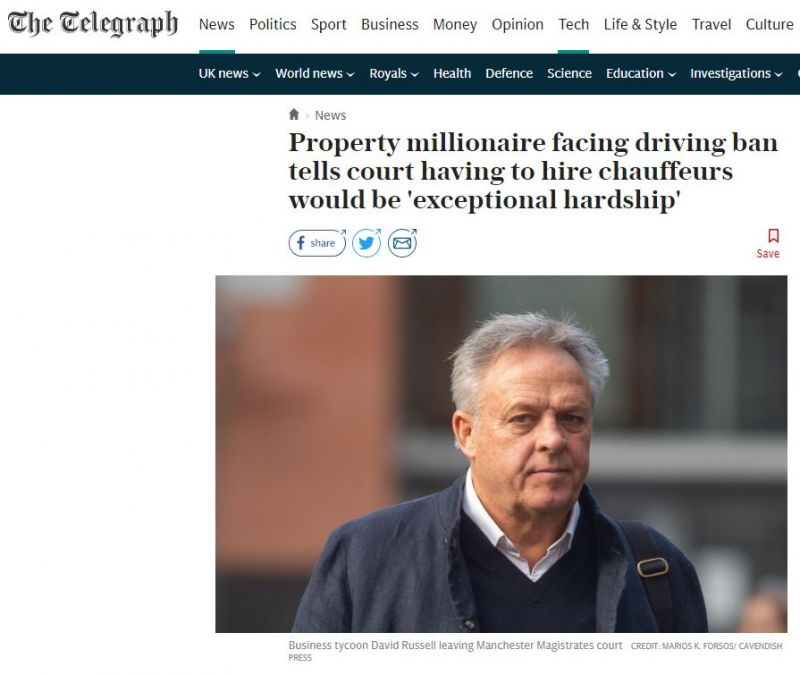 This was the headline this morning, and it made me smile.

You can read the original Telegraph article here.

During the last two weeks, I have successfully presented two “exceptional hardship” cases on behalf of clients who were not tycoons but businessmen who depended upon being able to drive to run their businesses. They required careful presentation because I know just how much these cases are scrutinised by magistrates.

The story I have just read said that David Russell had amassed 24 penalty points having been repeatedly caught speeding in his £114,000 Bentley. That is not a good start.

He was the chief executive of £271 million property company based in Manchester. He asked Manchester magistrates not to disqualify him because he said it would be extremely difficult to hire drivers willing to make early starts and taken to work. Presumably, he also needed a driver to take him to wherever else he needed to be in order to run his busy life.

I suspect he may have taken the decision that it was worth asking the court. He had nothing to lose so it was worth a punt. The fine and costs totalling £2,465 may not have meant very much.

If it was a serious argument then it seems to have been completely misguided. I always have to address with clients whether it is possible to fund the cost of the driver either from within the business or by external engagement. The cost is far higher than most people would guess and for the majority, it is not usually possible. Employers cannot simply redeploy staff with words “right, from now on you’re my driver”.

We are not told how much Mr Russell earned from the property company but they will have seen financial evidence and will have taken note of the type of vehicle being driven, and its value.

These cases are not easy to present and “exceptional hardship” has to be “exceptional”. I think most people would have been surprised to read that an apparently wealthy man could not find and afford a driver able to start early in the morning.

Were the proceedings started in time?

I often get asked this. Many people have an idea that most motoring prosecutions have…