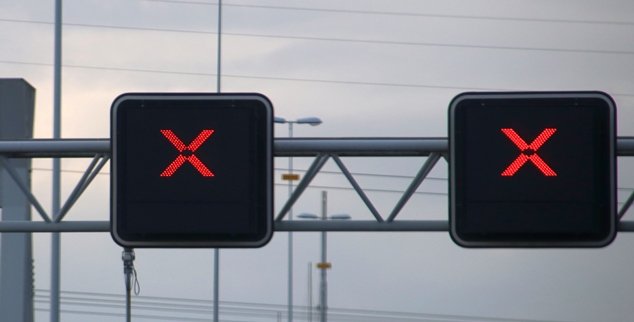 From Monday 10 June 2019 drivers who ignore lane closure signs on smart motorways in England will be issued with automatic £100 fines and 3 penalty points.

A closed lane on smart motorway is indicated by a ‘Red X’ displayed on an electronic overhead gantry and instructs motorists to move to another lane that’s running normally to avoid an incident ahead.

According to recent surveys, a significant number of motorists have been ignoring closed lane warnings either because they are not understood fully, or because they think nothing will come of it. The signs have been around for a long time, and police will be free to use cameras footage. Until now police had to catch motorists in the act, but no longer.

Hundreds of miles of England’s motorways have been converted into ‘smart’ routes since 2006 and many more are in the process of being changed.

Closed lanes are indicated by the red X sign on the overhead gantries, which also tell motorists if a variable speed limit is being enforced.

It will be an offence of strict liability so that if you are in a red lane you commit the offence. However, the existence of an emergency or other compelling reason may help in court.