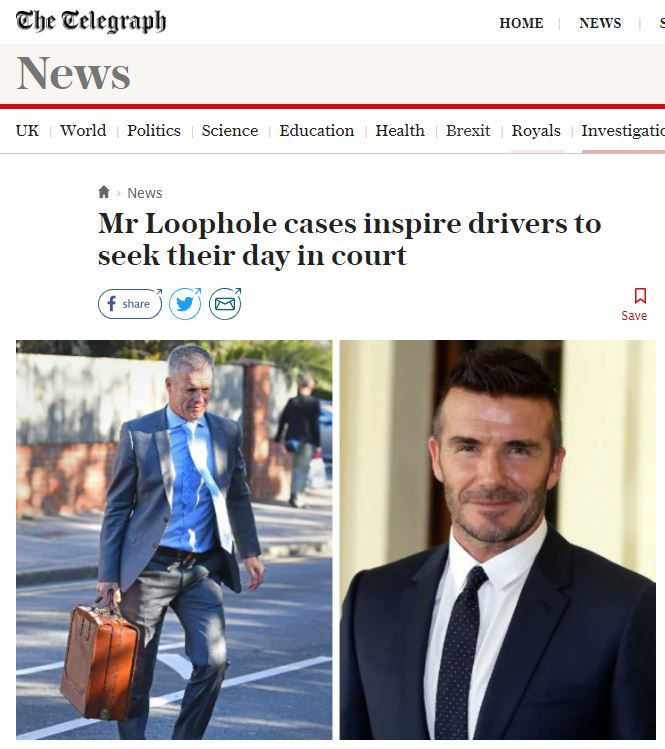 Why has it happened?

In April 2017 the penalty for using a mobile phone whilst driving was increased from 3 to 6 points. The penalty points increase for this offence means that more drivers are being called into court to face penalty points disqualification. It now takes only two such offences to take a driver to 12 points and a mandatory 12 point “totting” ban. There are more hearings taking place where motorists argue “exceptional hardship”. My own experience is that more motorists are disputing allegations of mobile phone use and rejecting fixed penalty offers.

It is also thought that the success of celebrities like David Beckham and Jimmy Carr, who respectively succeeded in speeding and mobile telephone prosecutions, has contributed to increase the number of drivers opting to challenge prosecutions in court. More are apparently willing to “have a go” encouraged by the publicity. After David Beckham’s success I had a significant increase in enquiries about the 14 day rule for Notices of Intended Prosecution.
I have long advised a degree of caution when deciding whether or not to take a matter to court for hearing. It is all too easy to see examples of one or two successes and to think they have universal application. They don’t. Its always sensible to take advice from a lawyer who is sensible and realistic but just choose with care.

I have also highlighted in earlier blogs the number of motoring lawyers and solicitors who claim huge success rates and who also openly encourage people to go to court. This particularly applies to drink drive cases where I regularly read misleading information on other web sites. These all need looking at with considerable caution. The risks are obvious. It is easy to spend very substantial sums of money with lawyers exploring the possibility of avoiding a conviction, and in reality getting nowhere. There is a myth that if you spend enough money you can avoid the ban or the conviction by finding a technical error somewhere, and most of the time it isn’t true.

The Telegraph article is an interesting read and I wholeheartedly endorse the need for careful thought. Beware the exceptions and always take advice from a sensible expert.