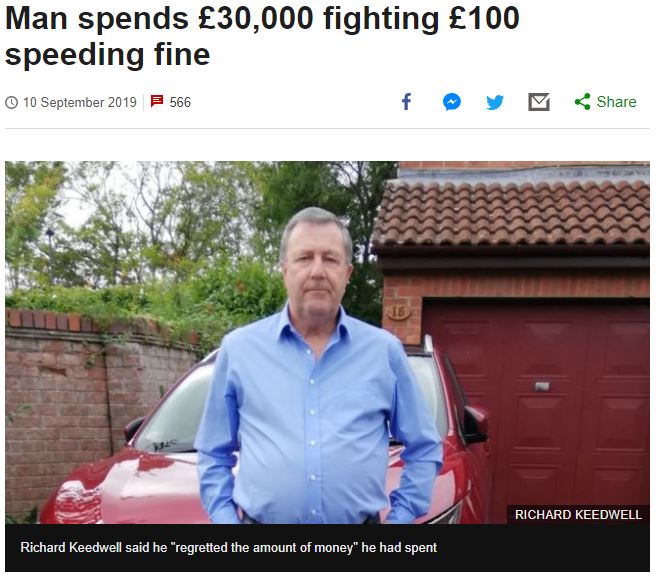 I read this recent BBC news story with considerable interest. I have been asked more times than I can remember; is it worth challenging my speeding prosecution?,

I read this recent BBC news story with considerable interest.

I have been asked more times than I can remember “is it worth challenging my speeding prosecution?”, and what one person may pay a lawyer and see as good value will not be the same for everyone. Mr Keedwell obviously felt ok in spending £30,000 on legal fees and costs over three years and getting absolutely nowhere. He had a clean licence and I always ask people not to lose perspective; a fixed penalty of £100 brings 3 penalty points with it and that’s all. Not only does a challenge bring significant expense but it also brings months of anxiety and uncertainty which you cannot put a price on. That always seems to extend to the family!

I always ask how they know they were not speeding, and often it is down to a “feeling” of speed, or sometimes a robust “I never speed”. The fact is that a very high percentage of motorists do speed but my experience is that most do it unwittingly. According to 2018 Department for Transport figures, the percentage of motorists exceeding speed limits in 208 was as follows:

It is therefore quite common!

With most road traffic prosecutions, it is easy to spend substantial sums of money and achieve little or nothing. It is part of a solicitor’s professional duty to point this out very clearly at the outset or as soon as it is apparent nothing very much can be achieved.

We are all free to spend our money as we choose, but £30,000? Mr Keedwell claimed he had “no case to answer” and recruited the help of a video and electronics expert who told the court the speed camera may have been triggered by a car in an adjacent lane or have been faulty.

However, he said it took four trips to Worcester Magistrates’ Court before his case was heard. After losing the case, he lost a further crown court appeal in August.

Apparently Mr Keedwell said he expected the case would be over fairly quickly but my experience is they rarely are. You are in for a long haul, particularly if the case is proceeding in a court to which you have to travel some distance. Travel and accommodation costs can themselves add significantly.

He said he simply wanted justice. That means different things to different people and is not what people always get – courts give a verdict and that isn’t always the same thing.

I am frequently asked for information about speed awareness courses. The most common questions seek…

Laser Jammers in the News – Again

Using these to avoid speed detection by police laser devices is a serious offence. It…